Professor Hsu Wen-lian is currently a Distinguished Research Fellow at the Academia Sinica, while also serving as director of its Institute of Information Science. After graduating from the Department of Mathematics of National Taiwan University in 1973, Dr Hsu went to the United States for further studies. In 1979, he obtained a Ph.D. in Operations Research from Cornell University, and later taught at Northwestern University. In 1989, he decided to return to Taiwan to enter the Institute of Information Science of the Academia Sinica, where has been to date.
Dr Hsu’s early research focused on graph algorithms. After returning to Taiwan, he became involved in the study of Chinese natural language processing techniques and systems, among which the most famous project was the intelligent input method “GOING” released in 1992. The semantic core combines rules, allowing the computer to automatically select the correct character, and this has become one of the most popular input methods for Chinese.
Later, he became increasingly involved in the research and development of a Chinese question answering system, pioneering Chinese semantic analysis, and which won the first place in the NTCIR international competition.
In addition, Dr Hsu applies natural language processing technology to biological data, using natural language techniques, combining biological knowledge with machine learning algorithms to solve important problems in protein structure prediction. Furthermore, in the field of data mining the biomedical literature, natural language processing techniques are used to deal with protein and gene name identification and interaction, and so the world’s first biomedical semantic role labeling system, BioSmile, was established.
Professor Hsu has made a tremendous contribution to natural language studies as well as bioinformatics, and he was made a fellow of the IEEE in 2006 in recognition of this work.

Jan Christoph Meister is a Professor of Digital Humanities with core areas Modern German Literature and Text Analysis, University of Hamburg.
In the period 1986-1995, he was Deputy Chairperson of Modern Languages at the University of the Witwatersrand, Johannesburg/South Africa. He taught at the University of Munich in 2006 before establishing the chair of Computational Humanities at Hamburg University.
Since 2013, Meister has been the Chair of the Executive Board of the EADH – European Association for Digital Humanities. He is a founding member of DHd – Digital Humanities in the German speaking region (2012-2015) and Director of the ICN (Interdisciplinerary Center for Narratology) at Hamburg University. He was the main convenor of the DH2012 conference at Hamburg University and the recipient of the 2010 Google Digital Humanities Award. Prof. Meister is an internationally renowned scholar. He is at the helm of the emerging field of computational studies in narrative. His research appeals to scholars of literary studies, but also of linguistics and history, and it partakes in debates in Digital Humanities.
He is the initiator of an E-Learning project on Narrative Theory. His publications include: Computing Action. A Narratological Approach. Foreword by Marie-Laure Ryan. (Berlin, New York: de Gruyter, 2003); (as editor, with Tom Kindt et al.): Narratology beyond Literary Criticism. (ibid., 2005)
Research Interests: Literary Computing, Cognitive Modelling, Narratology, Austrian Literature of the 20th century, Fantastic Literature. 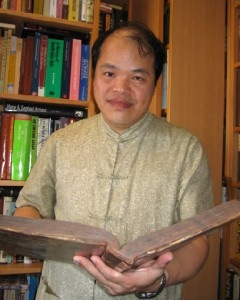 Professor Huang Yi-long is a scholar of the history of science and academician of the Academica Sinica. He graduated from the Physics department of Tsing Hua University in Hsinchu in 1977, and received a PhD in Physics from Columbia University in 1985, before studying astronomy at Massachusetts State University. He has published papers in such authoritative journals such as Nature and Science. Since 1987 he has worked at the Institute of History at Tsing Hua University in Hsinchu. He is the former deputy provost of Tsinghua University and is currently the director of the Tsing Hua University Research Center for Humanities and Social Sciences. In 2006 he was appointed an academician of the Humanities group of the Academia Sinica.
Professor Huang‘s research fields cover the history of science, the history of Sino-Western exchanges, the history of the late Ming and early Ch’ing dynasties, the history of medicine, the history of military affairs, and the history of marine exploration. The evolution of his research interests can be described as legendary within the academic world.
Professor Huang was the first Hu Shih Visiting Professor for Chinese Studies in Leiden University, the Netherlands, and has served as Honorary Professor of the University of Hong Kong and the Hong Kong Polytechnic University; Yangtze River (Changjiang) scholar at Tsinghua University, Beijing; Guandu chair professor, Taipei National University of the Arts; and is an honorary fellow of the Chinese Academy of Sciences, Beijing.
Representative works include “The Two-Headed Snake: the first generation of Catholics in the late Ming and early Ch’ing dynasties” (Shanghai, Ancient Books Publishing, 2006), “Ten Lectures on the Social History of Astronomy” (Fudan University Press, 2004), and so forth.
In 2010, he announced his research into the digital textual analysis of the “Dream of the Red Chamber”, and published in 2014 the book “Duet: A Dialogue between ‘Red Studies’ and Ch’ing History”, which has become an important representative work of the history of literature in the era of Big Data.